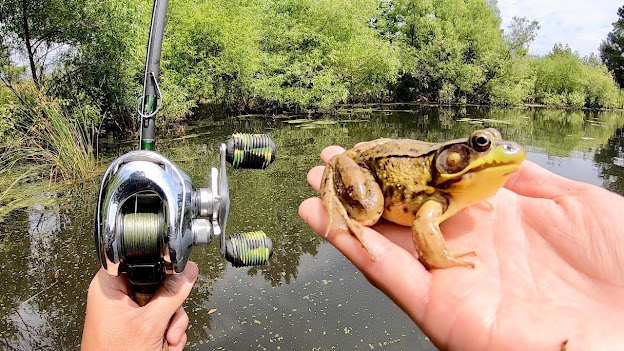 I have NOT been out fishing lately - so, as many of you fisherman know when you head out for the first time after a long break, you can hear weird things while on the water... this is a weird "hearing."

Posted by TightLine Fishing at 4:12 PM No comments:

Integrity as a Tennis Referee

Integrity is not what we do so much as who we are. And who we are, in turn, determines what we do for ourselves, family, and our customers. Our system of values is so much a part of us we cannot separate it from ourselves. It becomes the navigating system that guides us through every match every day. Our Integrity establishes our priorities and judges what actions we will accept or reject.

Integrity establishes the ground rules for resolving tensions on and off the court. It determines who we are and how we will respond before conflicts appear. Integrity welds what we say, think and do into a whole person so that we are not out of sync.

Integrity binds our person together and fosters a spirit of contentment within us. It will not allow our lips to violate what we know is right in our hearts. When integrity is the Referee, we will be consistent; our beliefs will be mirrored by our conduct. There will be no discrepancy between what we appear to be and what our fellow Officials know we are, whether your shift/match is calm or there’s adversity.

Integrity is not only the Referee between conflicting desires. It is the pivotal point between a happy, strong Official and a divided spirit. It frees us to be whole persons no matter what comes our way.

Jo-Ann Blackwell and Julie Taylor - a couple of Houston's finest!

Sherri-Ann Carroll is Houston's  Official of the Year! 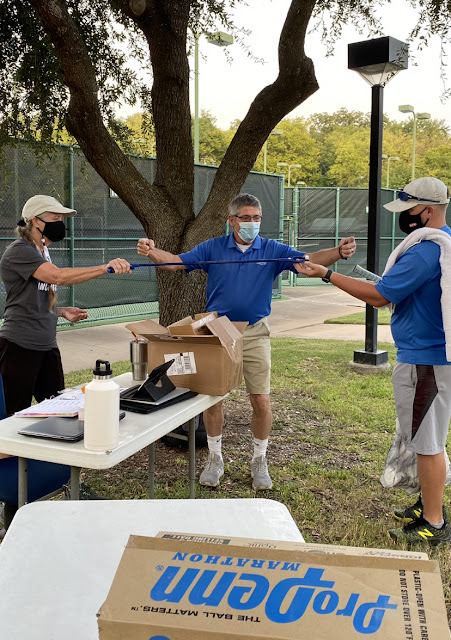 Here is Claire McFerran doing some social distancing!
Posted by TightLine Fishing at 6:34 AM No comments:

I know this is THE TIGHTLINE CATFISHING BLOG...
but, every so often I throw in Texas Tennis Stuff...

During this CRAZY COVID time, we are PLAYING TENNIS!!!!

Here are a few of our "ESSENTIAL WORKERS"

This picture was taken during the FIRST USTA TX Tournament after we were allowed back on the courts! Arlington SC Major Zone in July. 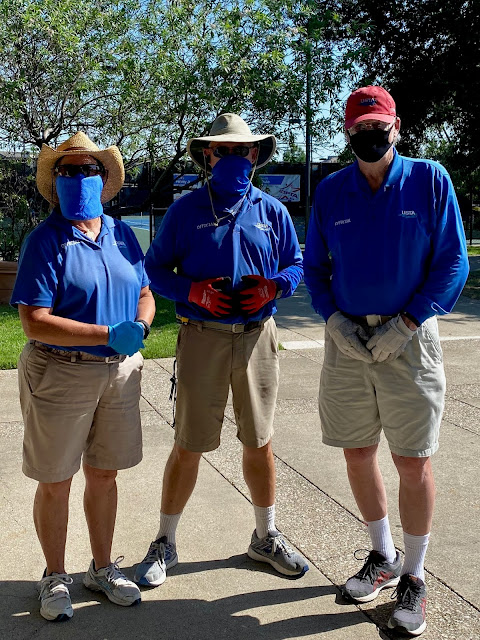 The GREAT Stephanie Burnam (High School Coach, one of Texas best Pro and Grassroots Officials -also a member of the Texas Officials Committee), Rick Wooten (Fisherman Friend, a member of the USTA's Officials Mentorship Program for new Officials and serves as Ref for many DFW tournaments) and Jerry Prohaska (Jerry does a lot of USTA events and is another outstanding Texas Official - AND I bet many people did not know that Jerry played PRO FOOTBALL for the Houston Oilers during the AFL period!).
Our Waco Tournament Director Claire McFarren had her hands full with new COVID measures and having to deal with me and four Crazy Masked Men! But, she was on top of EVERYTHING during the SC Major Zone in Waco this weekend. As usual, she ran a FANTASTIC event.

Officials for the Waco event included: Bob Cervenka -brand new fantastic Official and my "Let's get the story straight" Fishing Buddies.  That's me next and then Alan Jones -one of Texas's Star Officials and long time "super cool" friend... we have to get him working more!!!  The Honorable Ed Price (not in pic). Ed is a GREAT teacher, mentor, cranky (but excellent) tennis player, and family-friend. And My favorite Official of ALL TIME - Harry Foster -Harry serves as Ref for many TX tournaments, Coaches, and works Adaptive Events all over Texas.

Please send your Tennis AND FISHING pictures!!!! I love to post "SHOUT OUTS" to all of our TIGHTLINE readers!!!

Posted by TightLine Fishing at 1:21 PM No comments:

Like many families, our family went to Rockport every Summer for YEARS!

My Son-in-law and Grandkids got to go this past month and had a blast! 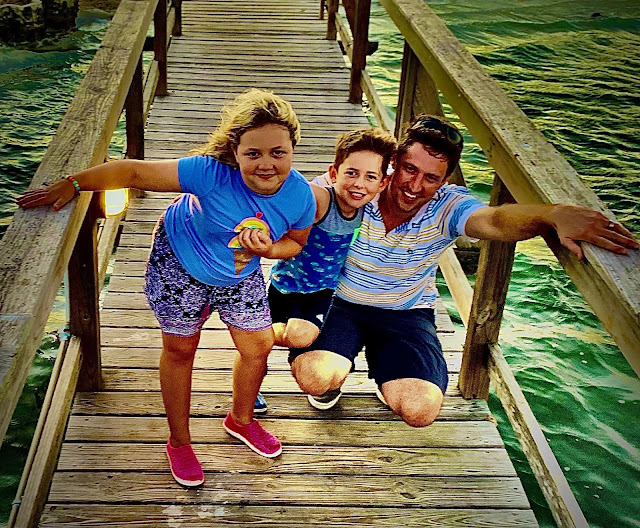 Here is Harper, Wilder and their Dad Wil 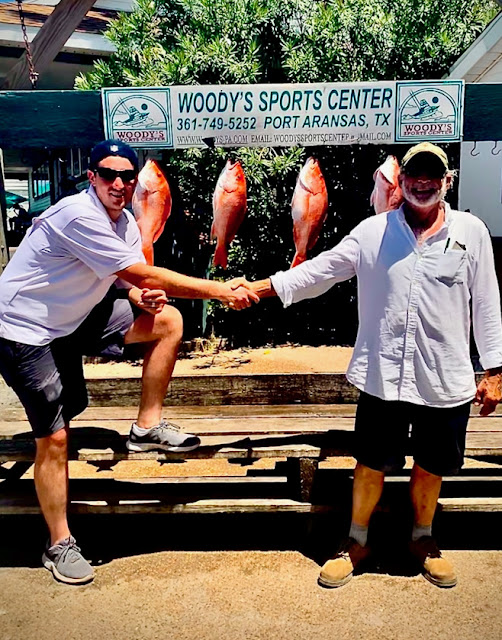 This is a mess of Red Snappers!

Caught by Wil and his Stepdad Carl.

These delicious fish were caught 70 miles out of Rockport. 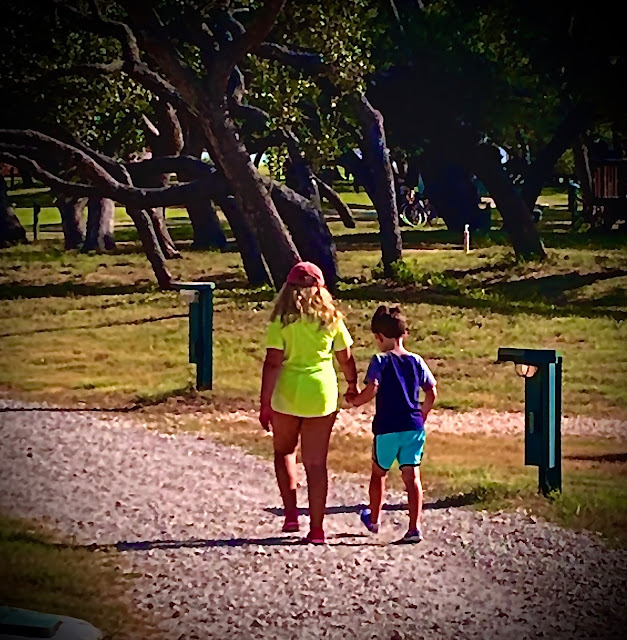 REALLY COOL PIC of Harpy and Wil -
It's kinda hard to notice but the windswept Oaks these trees are another great reason to visit Rockport!
Posted by TightLine Fishing at 4:38 PM No comments:

One of the coolest things ever is getting pictures from Fishing Friends! 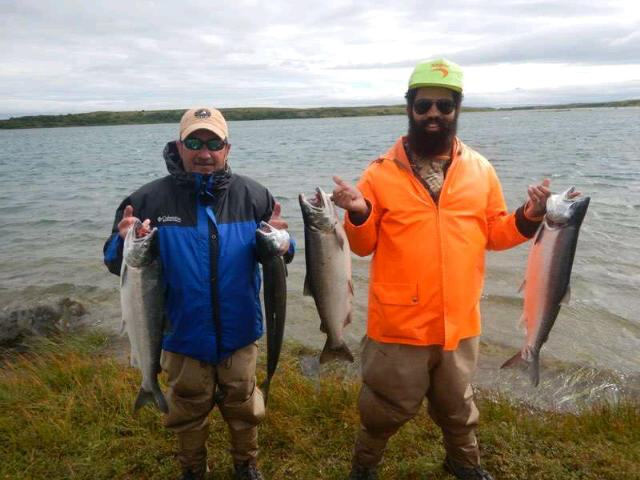 This is Tom and his son Brandon on the Egegik River in Alaska!
They caught these Coho in July... these Salmon average 2 feet and can weigh up to 18 lbs!!!
It is said that these are the BEST tasting Salmon - EVER! 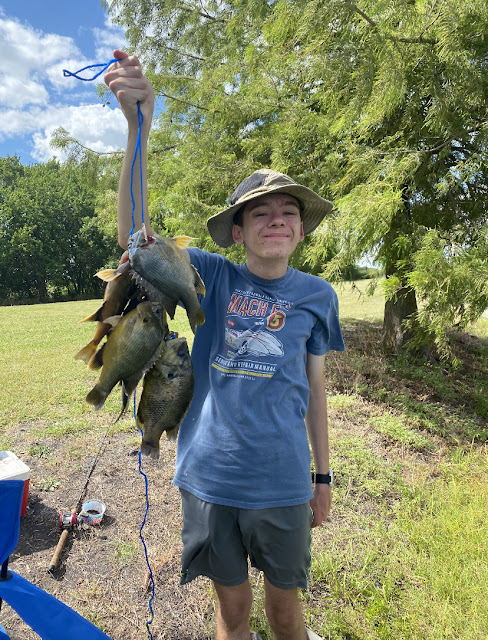 This is Rick Wooten's son Gunner they caught this stringer of Bream in Nevada Texas.
These are BIG!!! And GREAT to eat!!!
I've learned that Bream are SunFish but, not all SunFish are Bream! 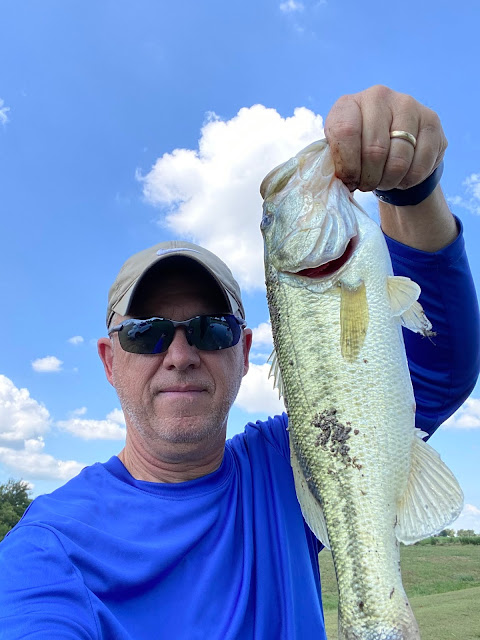 Here is Rick Wooten (one of our GREAT TENNIS OFFICIALS from the DFW area) with an 18 inch Large mouth Bass from the stock pond in Nevada Texas!!! 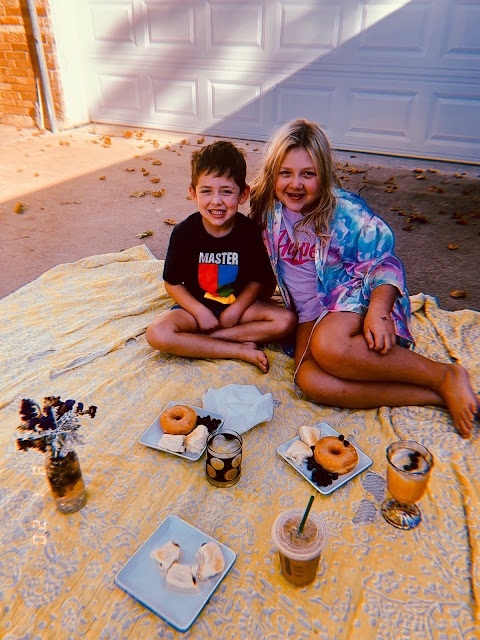 This is a COVID TEA Party hosted by my grandkids: Harper and Wilder
Their Mama (my daughter Alex) tested positive last week.  She is much better because of prayers and the fact that her husband Wil and the kids were EXCELLENT caregivers.
Thanks for the prayers from everyone and I am so happy she (KK) is better! 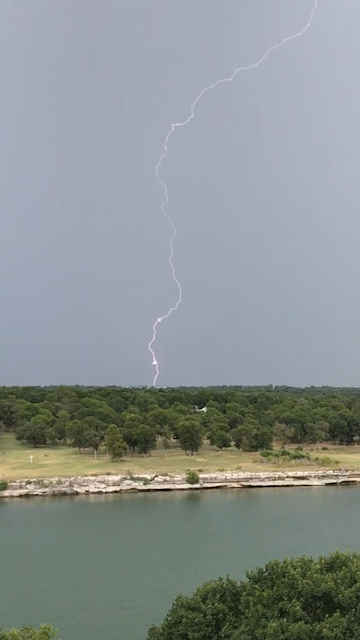 This told us that our Fishing Time on Lake Belton was OVER for the day!!!
PLEASE SEND ME YOUR FISHING PHOTOS!!!!
I love to SHOUT OUT OUR FISHING FRIENDS...
KevTennis@aol.com
Posted by TightLine Fishing at 10:27 AM No comments:

Owen and Wilder - these two are so much fun.  This was break in the action to feed the ducks.

While hiking we found this huge Spider... anyone know the name of this big guy?
By the way, Spiders are the only web developers that are happy to find bugs! 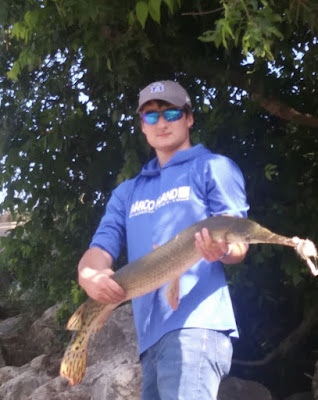 This is our friend Jacob... he caught this prehistoric Spotted Gar at the spillway below the Lake Waco dam.
Notice the gars snout, it was intentionally caught with a frayed piece of nylon!

Posted by TightLine Fishing at 4:37 AM No comments:

This is one of the GREAT FISHING pictures EVER!!!!
This is my grandson Owen with his dad on Inks Lake...
(note the Memorial Day Weekend Shorts!) 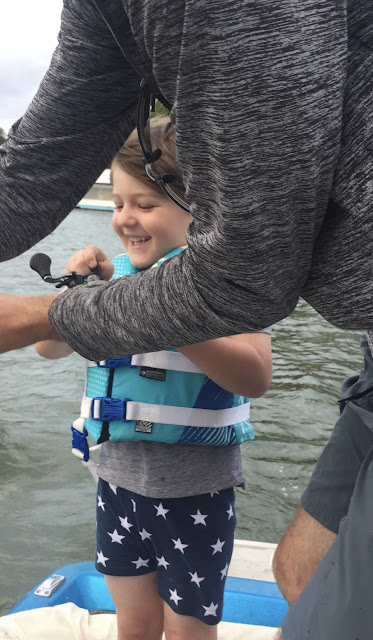 Posted by TightLine Fishing at 7:35 AM No comments:

The Crew... Roxy, Rick and me (Kevin) - specialize in the art of FUN CATFISHING!!! Whether you are wanting to fish or eat- we are all about fun catfishing.

WHAT IS TIGHTLINE CATFISHING...

Its all about the FUN - but behind the scenes we struggle to pull off outstanding catches... you see there is an art to making it look easy. Many years ago my family developed a catfish ritual dance that I make Rick use before every trip. It works everytime, and gets Rick loose for pulling in the big ones.

Why would you pick us to show you the best time on Lake Waco or Belton... Because we operate the finest catfishing service in Central Texas day in and day out. Other anglers fear us as much as the Catfish.

We love our job and it shows with every trip... yup, there is a good chance you might have fun with us.

Give us a call the next time you'd like to take a fishing trip or have your next party catered...

IT IS A BUSINESS DOING PLEASURE WITH YOU!!!!!

Check out our rates below...

What it will cost you...

If your outreach/charity organization is needing to raise some funds - think about a fish fry. We love to cook up fish for great causes.

BTN - By the Numbers

After my Grandpa told my Grandma, "You know fish is great brain food." She looked at both of us and said, "Well then you two should fish for a whale!"

Still trying to figure out what she meant...

(WHEN YOU GO FISHING WITH US ... YOU WILL NEED THE GUINESS HOTLINE NUMBER - to report your fish - look it up!)

CATFISH (pronounced- CATFISH)
n.pl. catfish or catfishes
There are TWO main rules in Catfishing:
1. Never give out all of your information...

This section of the BLOG is dedicated to TENNIS OFFICIALS that read the Tightline CatFishing updates...

BE SURE to join us for the Texas Officials Conference call set for May 11 12nn. Mick Walters should of sent an email invitation... if you do not have it - please contact me.

MANY of our Officials were affected by this shutdown – the USTA sent out an email to all Certified Officials which included the following link to financial assistance: CLICK HERE or copy and paste:(https://www.usta.com/en/home/organize/program-resources/national/tennis-industry-united.html)

Our Texas Section Officials Committee has created a FANTASTIC website for Texas Officials website: www.usta.com/texas-officials This site is also a great place to send recruits for Officiating!

Thanks for your Dedication to TX Tennis

IF YOU HAVE SOMETHING INTERESTING - Officiating questions, happenings, ideas or suggestions - let me know!
KevTennis@aol.com